I think I have successfully introduced my son in my first post. On Monday I will introduce the world to my precious baby girl. (As of next Monday, my little darling will be just three months away from turning two!)

Today’s post is about the smelliest, strangest, smartest, and sassiest of beasts: the Miller mutts.

(I love all of that alliteration!)

Jasmine is a black lab and Reilly is our pittbull mix. We believe she is a little lab, terrier, and pit blend. They are both rescues and drive us up the wall, but it wouldn’t be home without them! 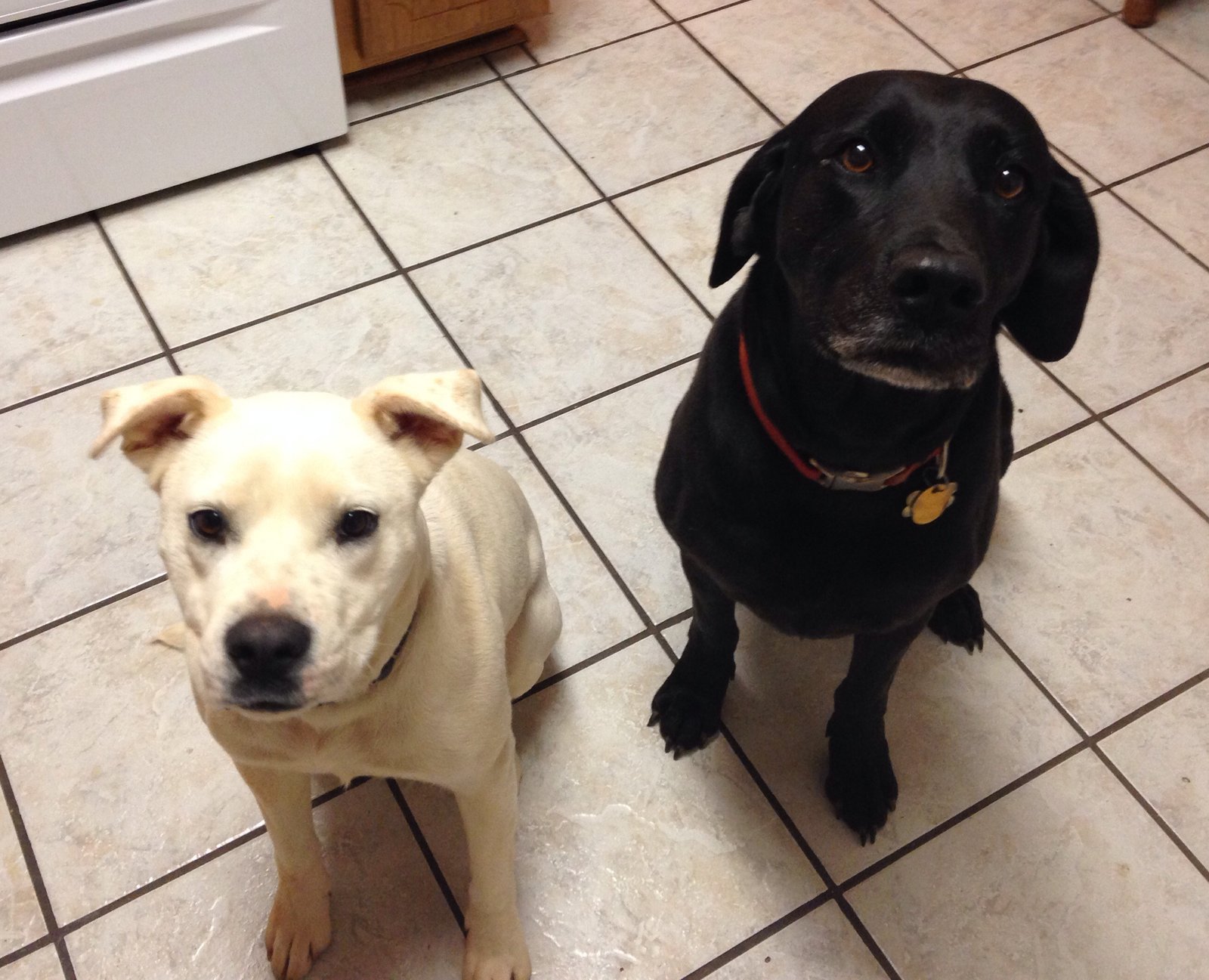 My husband and I rescued Jasmine a month before we got married. (She got to live in the apartment with Wes before I did!) We went to Petsmart that day to look at dogs hoping to adopt one. I really think it was more me wanting to and Wes was just along for the ride! There were so many choices! When I first saw her I knew she was the one. She looked so thin in that crate, sitting staring at me with these large golden eyes. We asked the lady in charge to get her out so we could walk around the store, but I knew already that she was ours! 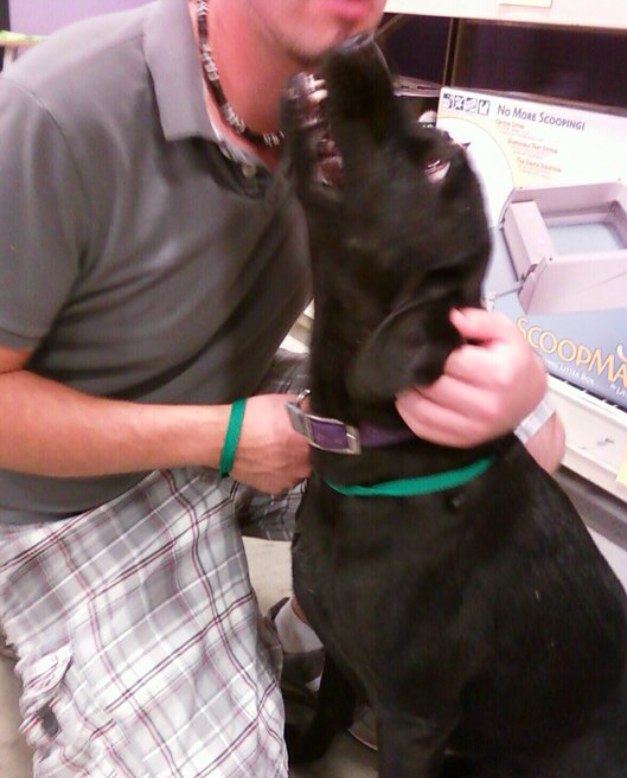 She was a great dog, but we learned quickly that she had to be crated while we were gone! We learned the hard way! While Wes was at work and I was at school, she ate through the drywall in our bathroom, ate the bathroom doorknob, and the door stop…all in one day!(Now we can give her the run of the house and she won’t touch a thing. She thinks she is a lap dog, though, so if you’re sitting somewhere, be prepared for 70+ pounds to come snuggle!) Yes, I have always heard not to let larger dogs stay in an apartment for long, but she was and still is the laziest dog in the world and loved the apartment life! We would go on two long walks a day, not including potty breaks, and had so much fun in those early days of married life! We didn’t stay in the apartment for long because after we got married, we got pregnant with our son very quickly, and bought a house with a huge backyard. She and Liam became best buddies, especially when he was able to share his snacks with her! 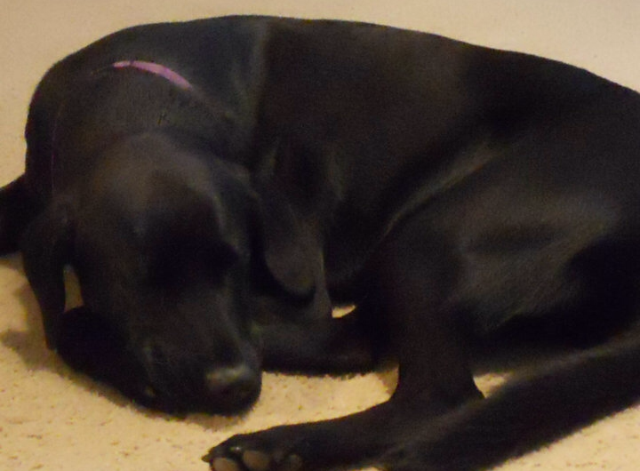 With such a large backyard, we knew Jazz needed a friend! After being the only dog for almost three years, we weren’t sure that she would agree, but she got so lonely during the day!

We began looking online at rescues and posts on social media. One day, while six months pregnant for the second time, I saw an ad online from a lady who had two puppies dropped off in her yard. When I contacted her, she only had one left and after a picture, I knew we needed her. My toddler and I went to Petsmart and got a new collar, leash, bowl, etc. When Wes got home, we met the lady at a gas station to pick up our new puppy. The lady was very curt and as soon as I grabbed the puppy from the woman’s front seat through the window, she sped off. (Strange situation!) The puppy was covered in dirt and fleas, and smelled horrendous, so we went home and gave her a bath. She was around 8-10 weeks old and we weren’t sure what color she was because she was filthy. Much to our surprise, she was solid white with a splatter of blue spots on her nose and a few liver spots on her belly! She had an umbilical hernia, which the vet took care of, and we introduced to her to Jazz.

We named her Reilly. 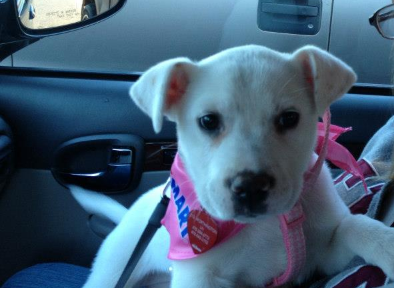 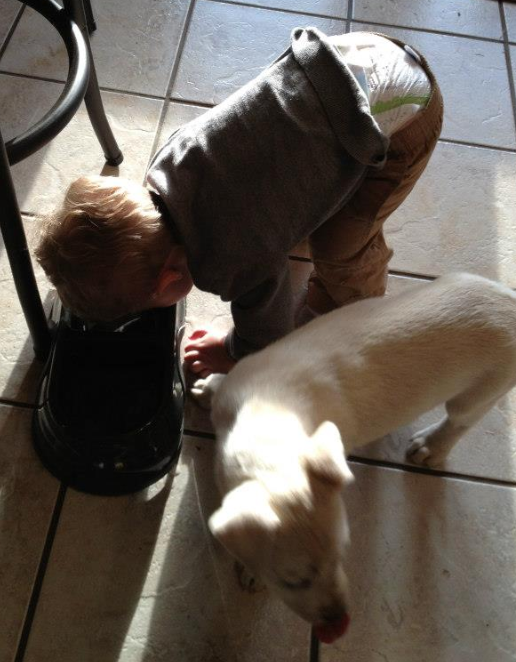 Now the two Miller mutts are the best of friends and a solid team. Jasmine
corners the squirrels and rabbits while Reilly climbs the trees when they try to escape. I’ve seen Reilly catch a bird in the air. She enjoys climbing trees and basking in the sunlight that flits in through the leaves. She is also a chewer, even at two years old. We have lost a a grill cover, numerous Kcups (coffee), toys, wooden pallets, a sandbox, Little Tykes playhouses, our toddler’s battery powered racecar, firepit poker, a swingset, numerous frisbees and balls, etc. She is currently working on our new grill cover. The problem is that we never see her do these things, we just come home to a mess. She can easily leap over a baby gate, sometimes two stacked on top of each other. There is no containing her! 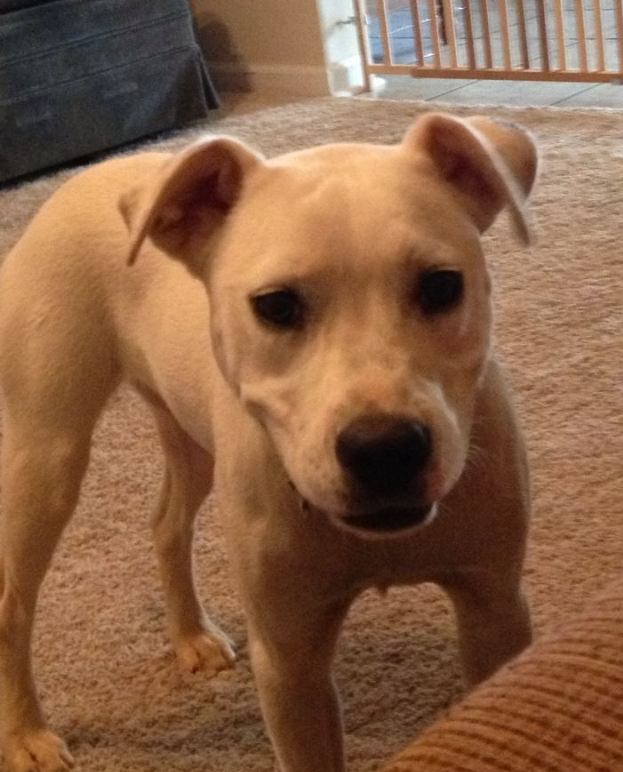 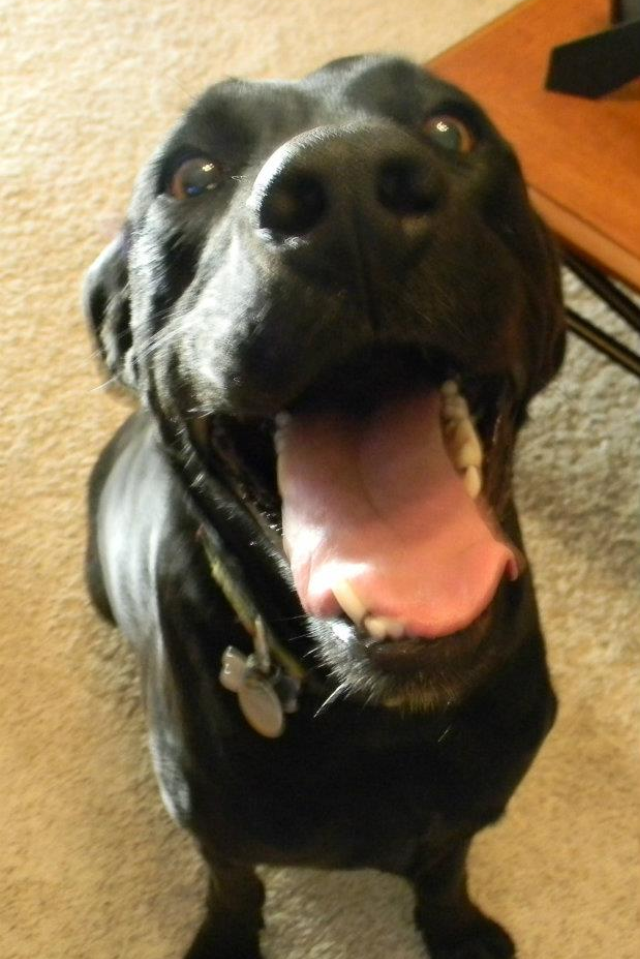 Reilly is now two and Jazzy will be seven later this year. They are the greatest dogs with our two crazy toddlers and they truly make up the animal part of the Miller crew!

Previous A mother was born…
Next Be still my heart!