“Don’t say nothing!” Jen Hatmaker wrote a post on her social media and one of my friends shared it. I glanced through it and the more I read, the more I hurt.

There are people, faith professing followers of Christ who embodies love, saying nothing at all. Is saying nothing worse than what some of these so-called followers are saying, yes and no. I refuse to comment on some of those posts because I know the Jesus I follow is not the Lord of their hearts that slew such evil rhetoric and pain. Anyway…

“Those who profess to follow Christ should never be outshone when it comes to loving others. The silence from some of Christ’s followers is deafening.”

I strongly believe that if Jesus walked this physical earth today, He would be right there in the mist of this tragedy. He would be handing out water, giving blood, hugging those broken hearted people who fled the scene, encouraging the first responders, surgeons, dispatchers, ambulance drivers, nurses, etc. If that does not kickstart your heart, I just do not know what else will. Love. Love. Love. People died. People suffered and died horrific deaths. Agonizing deaths where they begged for their lives and for the lives of their loved ones. How does that not rip your soul out? Have you read the text messages from a grown man texting his mother moments before his death telling her that he loves her? Have you heard the stories from the surviving victims who not only have emotional and physical trauma, but they hate themselves because they survived when their friends and families did not. Did you hear that the bodies that were cut down were left in the club while investigators took photographs and combed the area for survivors, meaning that the cellphones in the pockets and surrounding areas of those bodies rang incessantly, calls from frantic loved ones searching for any shred of hope that their brother, sister, mother, father, son, daughter, spouse, best friend, etc was alive. Do you know how many families from all over the world received a call from some one other than their loved one that would confirm their worst fear?
My God, as a mother myself, I cannot take that! My soul hurts.

Ok, I get it. You do not agree with the lifestyle that some of those people in that particular club engaged in. And? Your point is? Do you honestly think they deserve to die for something that does not affect you in anyway? Do you think that their lives mean less than your own? You truly think that this kind of tragedy will not ever happen to you or occur in your little corner of the world? Certainly none of these people got dressed up thinking that this night would be there last night on earth. These are people, once living, breathing people that spilled the same color blood that you and I have. How are you any better than anyone else?

When you say nothing at all, the silence is more deafening than you realize. Beth Moore spoke to my heart when she tweeted the following: 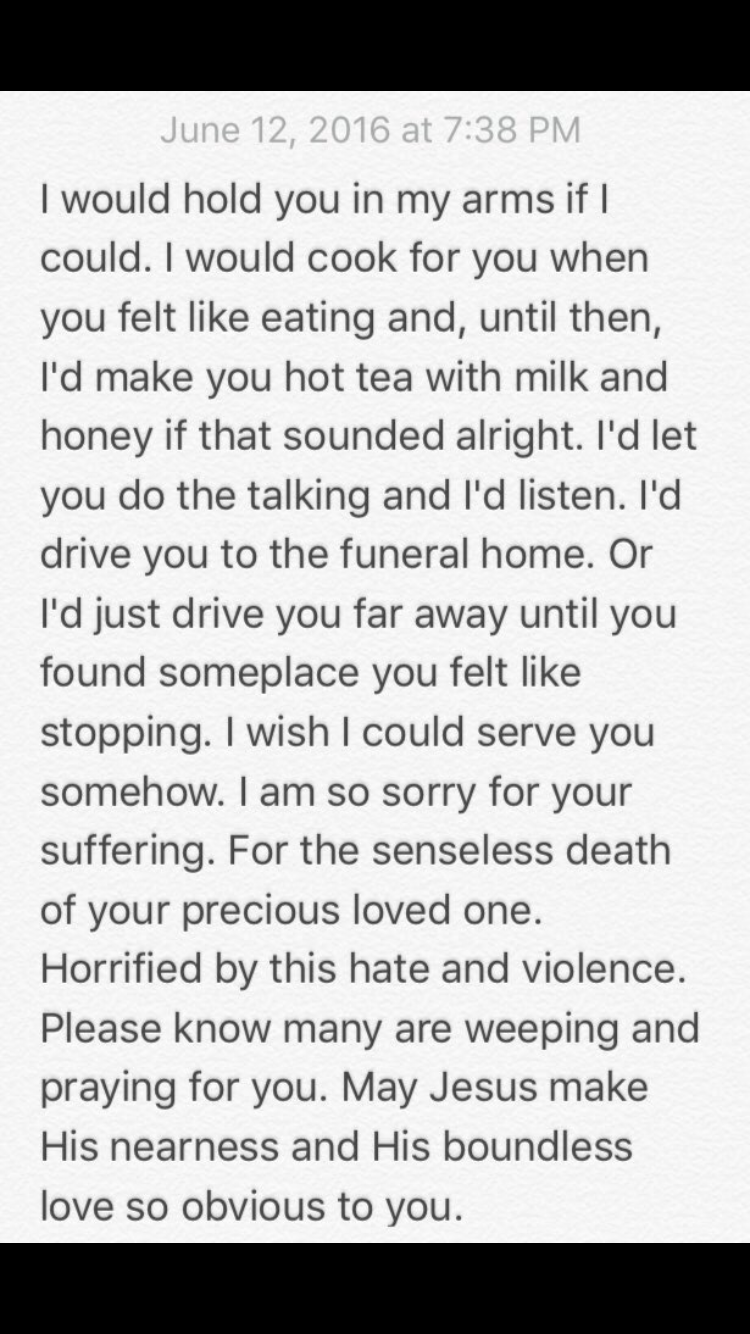 My family and I have been planning a vacation to Orlando for weeks now. We leave at the end of this week and now we have other things placed on our calendars. Yes, we will still embark on the typical Disney park adventures, but we will also lay flowers at the makeshift memorial where the slaughter occurred. We will also throw our arms around the people of the community who hurt far deeper than those of us who have only seen images on the new stations.

Be reckless with your love. Jesus was and still is. Search your heart; I hope you find the real Him. Remember, as the fabulous Bob Goff lives out: LOVE DOES! Love is never stationary, love does.